Last week, I spent two days in designing my PowerPoint presentations with great shapes, animations, images, tables, word art, basic shapes, stars, etc. Unfortunately, my PowerPoint crashed and unsaved, I didn’t have extra time to make such a valuable PowerPoint again. How can I recover unsaved PowerPoint on Mac?

Many users have similar problems, and I am not the exception.

To avoid the PowerPoint file from being overwritten, please do not add new data or install Mac Data Recovery software on the hard drive where you lost PowerPoint presentation. Just follow below ways, you will recover unsaved PowerPoint on Mac and get your lost or deleted PPT file back.

Method 1: Use PowerPoint AutoSave on Mac if Enabled

What is PowerPoint AutoSave?

Microsoft Office has a fantastic feature called AutoSave, which is built in to automatically save a temporary PowerPoint copy on a periodic basis. The feature is turned on by default and the default save interval is 10 minutes. That is to say, not only limited to Microsoft Office PowerPoint, Office Word and Excel are also featured with an AutoSave, for the purpose to restore office files when accidents happen.

How to Enable or Disable PowerPoint AutoSave on Mac?

By default, the AutoSave feature is ON in Microsoft Office. However, to make sure if you can recover PowerPoint files that not saved on mac with AutoSave, you can check if the feature is enabled, or enable/disable according to your needs.

Where are PowerPoint AutoSave Files Stored on Mac?

The amount of new information that the recovered PPT file contains depends on how frequently a Microsoft Office program saves the recovery file. For example, if the recovery file is saved only every 15 minutes, your recovered PPT file won't contain your last 14 minutes of work before the power failure or other problem occurred. And you can also use above method to recover word document on Mac and recover excel files not saved.

How to Recover Lost or Deleted PowerPoint on Mac?

If you still cannot recover the unsaved PowerPoint files even you have tried all above-mentioned methods, or you just lost/delete the files by accident, there are extra 3 ways to restore them.

#1 The Easiest Way to Recover Lost or Deleted PowerPoint on Mac.

Cisdem Data Recovery will be a good choice for you as it is effective in PPT recovery no matter which PowerPoint version you are running. It is the best data recovery software for Mac which can recover files such as office document files, pictures, videos, etc from Mac hard drive and other external storage devices.

How to perform PowerPoint recovery on Mac?

Open this PowerPoint Recovery Software and go to Disk Data Recovery, choose the hard drive where stored your PowerPoint files.
Tip: If you want to recover PowerPoint document from USB, SD card or external hard drive, please connect it to your Mac in advance. 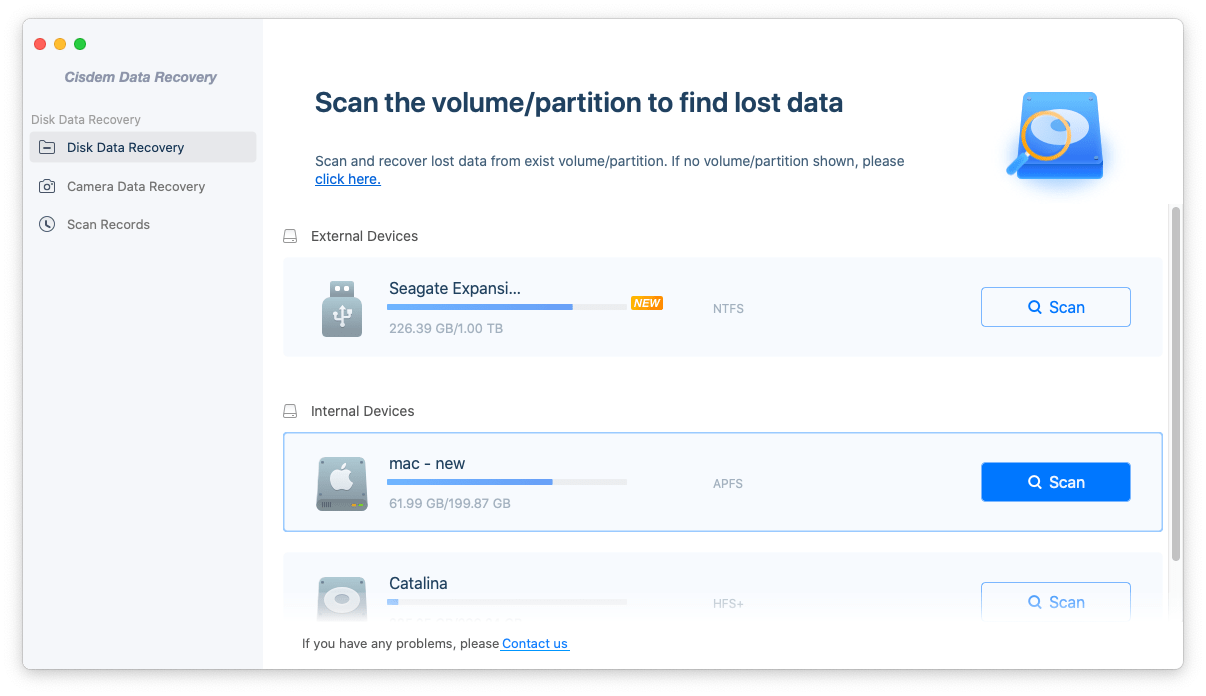 Step 2Click on Scan to start the scanning process, use the Filter to find lost or deleted PowerPoint files.

After clicking on Scan, this program will run both quick and deep scanning to find the most files. You can go to Path or Type to check the found files. Also, you can use the filter to find specific PowerPoint files. 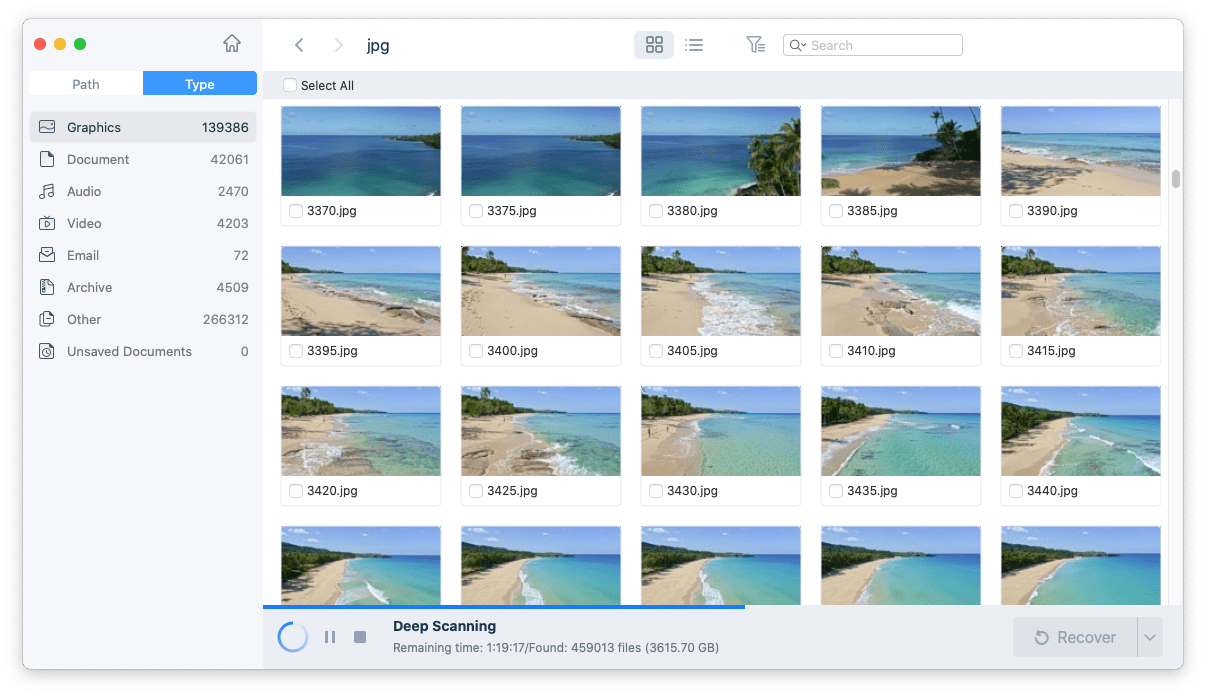 Double click on the PowerPoint file to preview, select and Recover them to your local drive or Cloud. 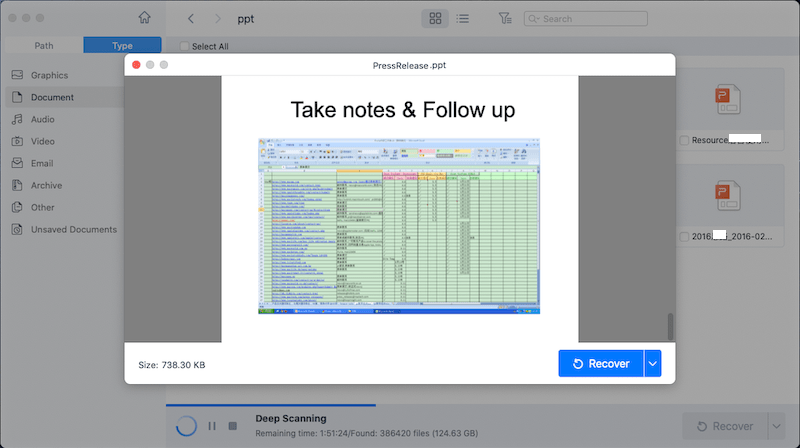 Also, you can check out the following video tutorial (start from 01:26)

If you are new to using Mac, you may be not aware of the fact that all the deleted files are just moved to the Trash, if you want to permanently deleted the files, you will need to manually delete in Trash. So, it is possible to recover lost or deleted PowerPoint files in Mac Trash.

#3 Recover Lost or Deleted PowerPoint from Mac with Backup

If you have a good habit to back up files regularly on online storage services, you can recover lost or deleted PowerPoint files on Mac via backups.

Time Machine is a mac utility to back up all kinds of files onto an external hard drive. If you have turned the Time Machine ON, you can recover lost or deleted PowerPoint on mac easily.

Also, if you have backed up files in other storage service, you can recover via those backups, the steps are quite similar.

Extended: How to Recover Previous Version of PowerPoint file on Mac?

# 1 Ask for the previous version.

If you have sent the PowerPoint file before and edited later, you can get back to the receiver of your previous PowerPoint file, ask for a copy and rename it.

As we mentioned before, Time Machine can help to recover lost or deleted files via backup. Also, it is capable of restoring previous version of a powerpoint file on mac.

Although it is always recommended to periodically save your PowerPoint files to avoid any kind of data loss, however if you haven’t been very diligent in saving your work or have suffered from events such as a system crash that may cause data loss, then you can follow the above mentioned process to recover unsaved PowerPoint files and get all lost PPT files back by using Cisdem Data Recovery. Last but not least, always click the "Save" button after you make any change to your PPT presentation.