What is Duplicate Annihilator?

Duplicate Annihilator is developed by Brattoo Propaganda Software to help Mac users get rid of duplicate photos. It has four editions. 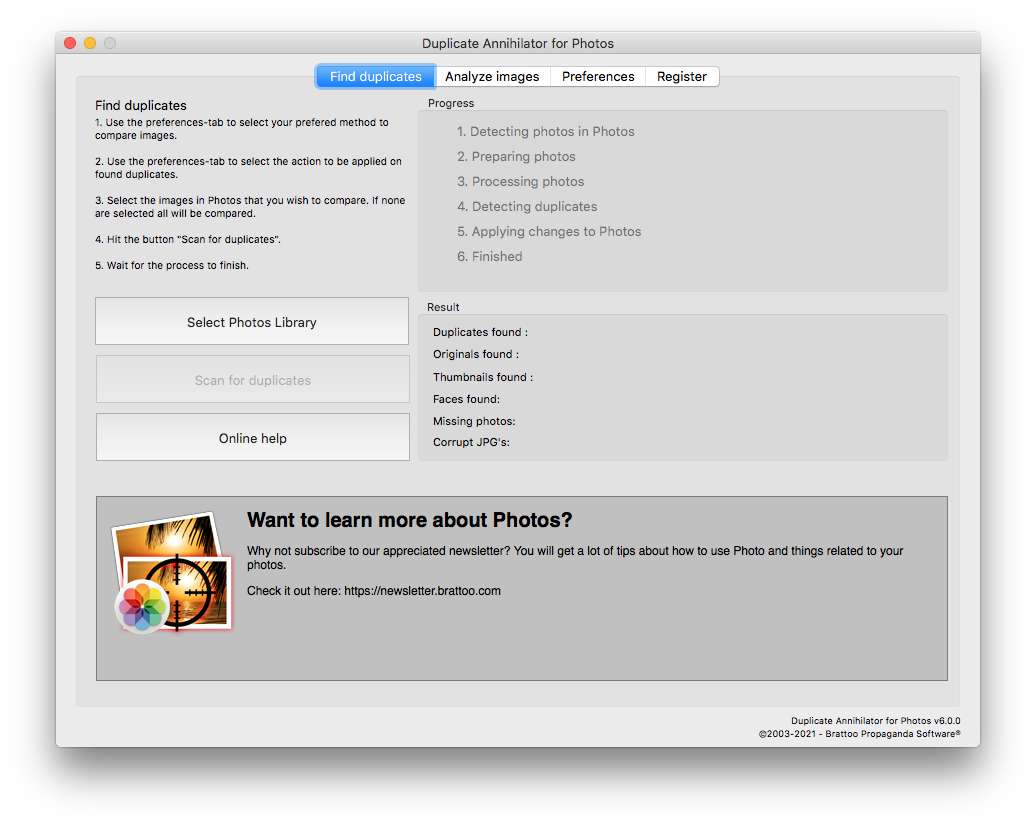 In addition, this Mac app can also detect missing photos, corrupt JPEG files and imported thumbnails in a photo library.

Is Duplicate Annihilator free? No. It’s a paid app. But a free trial with limited functions is available.

The app is easy to install. The process is the same as installing any DMG installer downloaded from the Internet. It’s also easy to uninstall.

Note: This app only works with Mac’s Photos. To also scan Mac folders for duplicate photos, check out this alternative.

Exact duplicates are files that are exactly the same regardless of filename. The most reliable way to set Duplicate Annihilator to find only exact duplicates is to use the Restrictive Mode. You can also consider the Magic Mode. 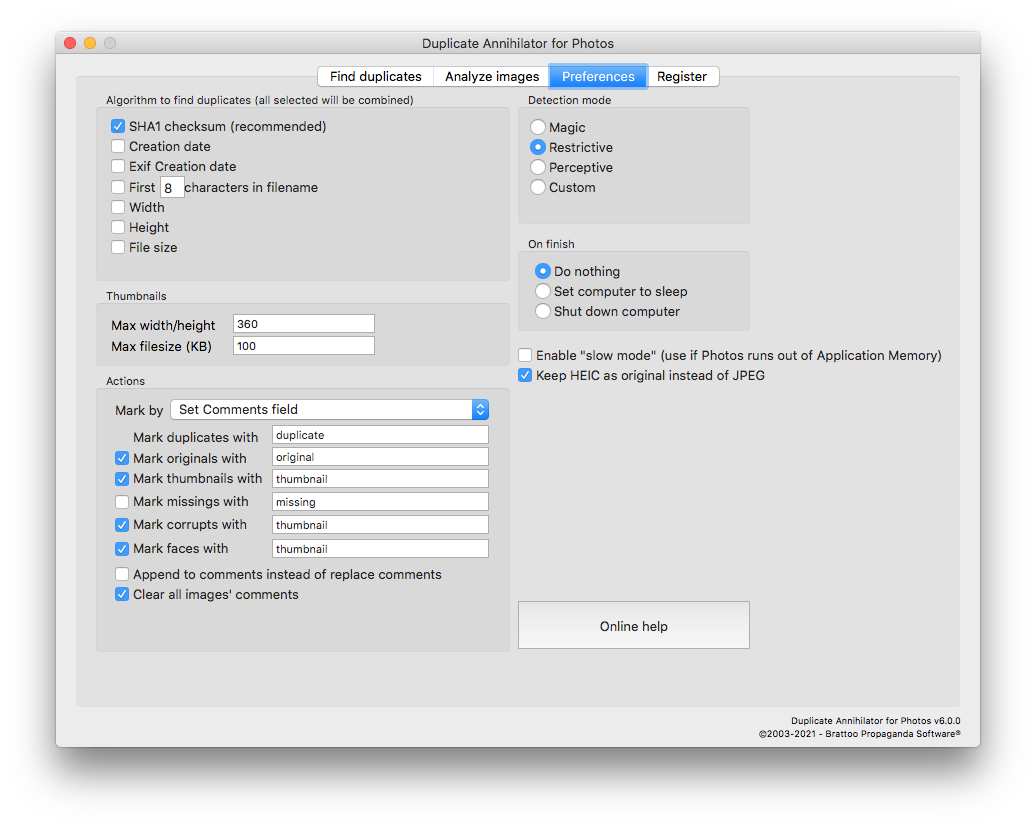 If you want to use the Custom Mode to identify exact duplicate files, select SHA1 checksum on the left. You can also simultaneously select Width and Height, which is not essential.

Find near duplicates in Mac’s Photos

Duplicate Annihilator can also scan Photos for near duplicate photos. To detect them, you can use the Perceptive Mode, which finds both exact and near duplicates. Also, you can switch to the Custom Mode and use certain combinations of the provided algorithms. 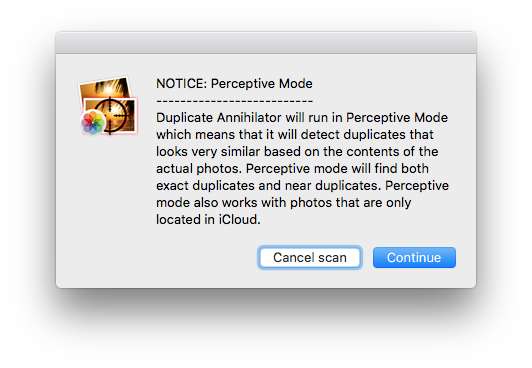 When it comes to identifying near duplicates, both Duplicate Annihilator and the other app found duplicate photos with different sizes. The other app also found all burst photos and grouped them together for me to easily pick the best shots and eliminate the rest. 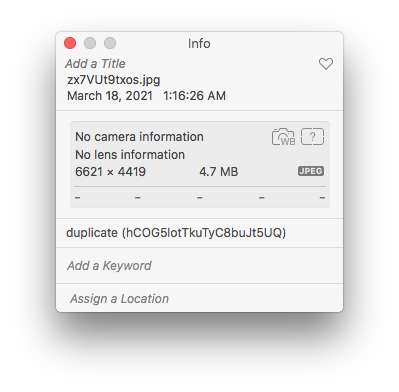 The marking is automatic and almost not customizable. You can’t control which is marked “original” and which is (or are) marked “duplicate” in each group of identical photos. It doesn’t matter much when it comes to exact duplicates. But the app does offer an option to mark HEIC instead of JPEG as original.

It takes a few steps to delete the found duplicate photos and videos. Go to Mac Photos. Use Photos’ Search function to find the marked duplicates. Select the items and delete them.

Interface and ease of use

The interface is informative, easy to understand and easy to navigate. The app provides an explanation for each of its detection modes, helping users understand how a detection mode works. On the whole, it’s easy to use, but the removal of duplicates is not that straightforward.

How to use Duplicate Annihilator

1. On your MacBook Pro, MacBook Air or iMac etc., download and install Duplicate Annihilator for Photos.

2. Under the Find duplicates tab, click Select Photos Library and add the library you want to scan for duplicates.

3. Under the Preferences tab, select the desired detection mode or algorithm(s).

4. Configure other preferences based on your needs.

5. This step is optional. To only scan certain photos (instead of the entire Photos library) for dupes, select the photos in Photos app.

6. Click Scan for duplicates under the Find duplicates tab. When the scan is complete, you can go to the Result section to find the number of the duplicates found.

7. In Photos app, type “duplicate” or the custom keyword in the search field in the top right corner. Press the Return key. 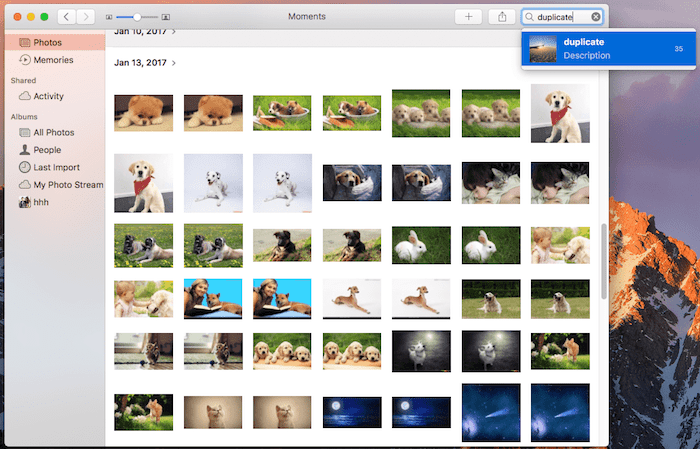 8. Select all the listed duplicates and delete them. The deleted items go to Recently Deleted.

The best alternative for Duplicate Annihilator

Cisdem Duplicate Finder is the best duplicate file finder for Mac. It excels at cleaning up duplicate photos in both Mac Photos and folders.

Unlike Duplicate Annihilator, this app can find all exact duplicates in a selected Photos library, folder or drive. Also, it can find duplicates across multiple Photos libraries, folders or drives.

Cisdem Duplicate Finder can detect photos taken in burst mode, certain edited (e.g., compressed or rotated) versions of the same photos and certain other visually similar images. They are grouped together for you to effortlessly pick the best photos to keep.

All the detected duplicate photos and other duplicates will be displayed in the result window. You can easily view, sort and preview them. 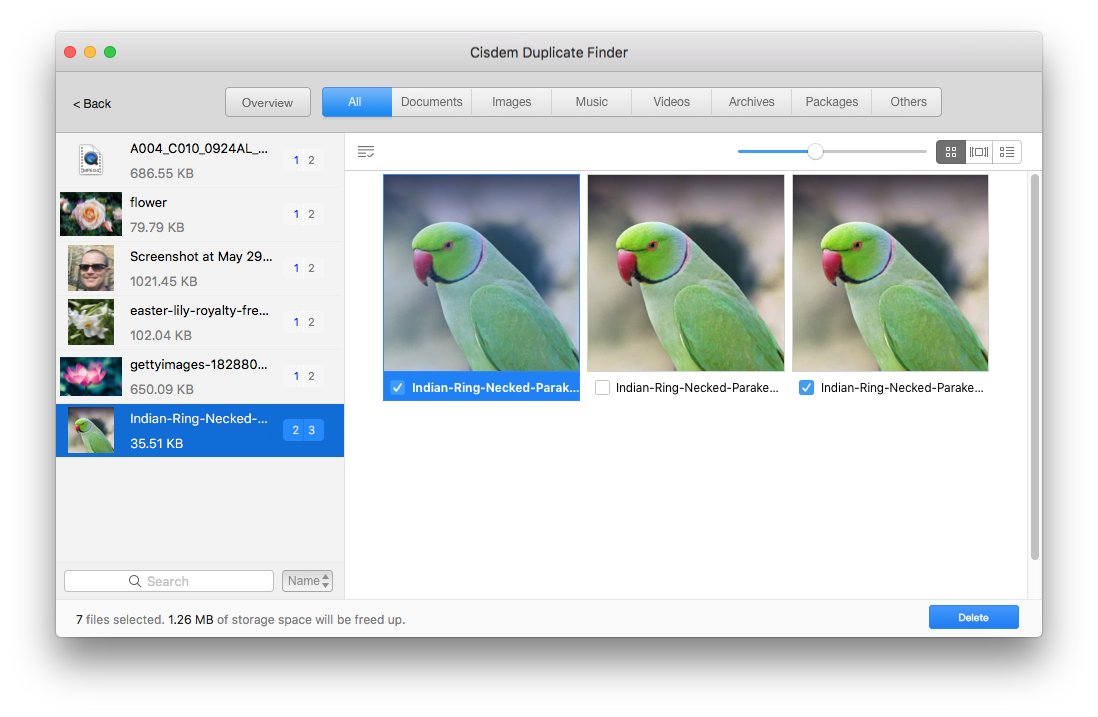 Cisdem Duplicate Finder smartly and automatically selects exact duplicate files for deletion. It also offers 4 rules for you to customize the selection. Or, you can select/deselect by hand. Clicking the Delete button will delete all selected duplicates at once. It’s that easy! Deleted items will go to Recently Deleted in Photos. 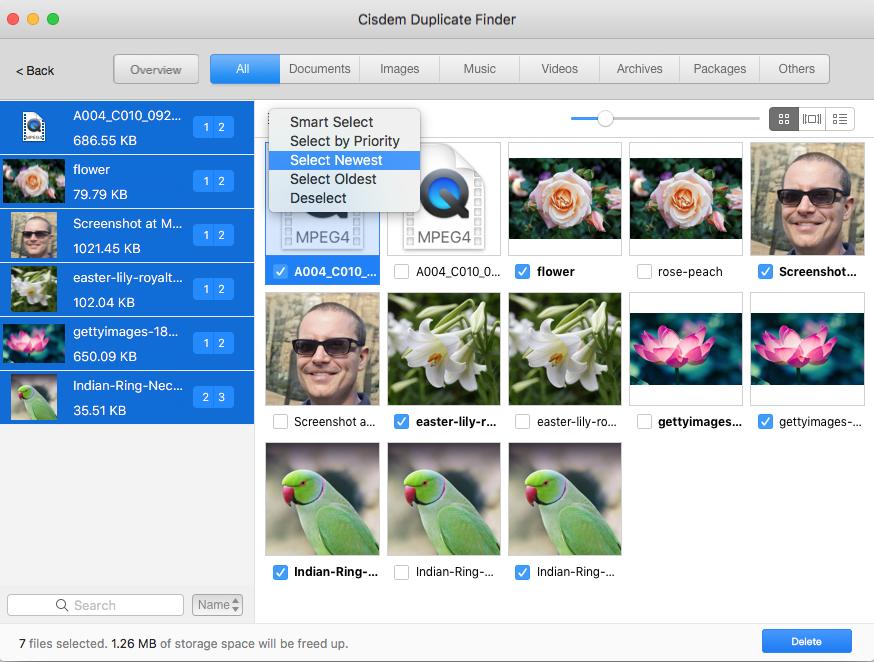 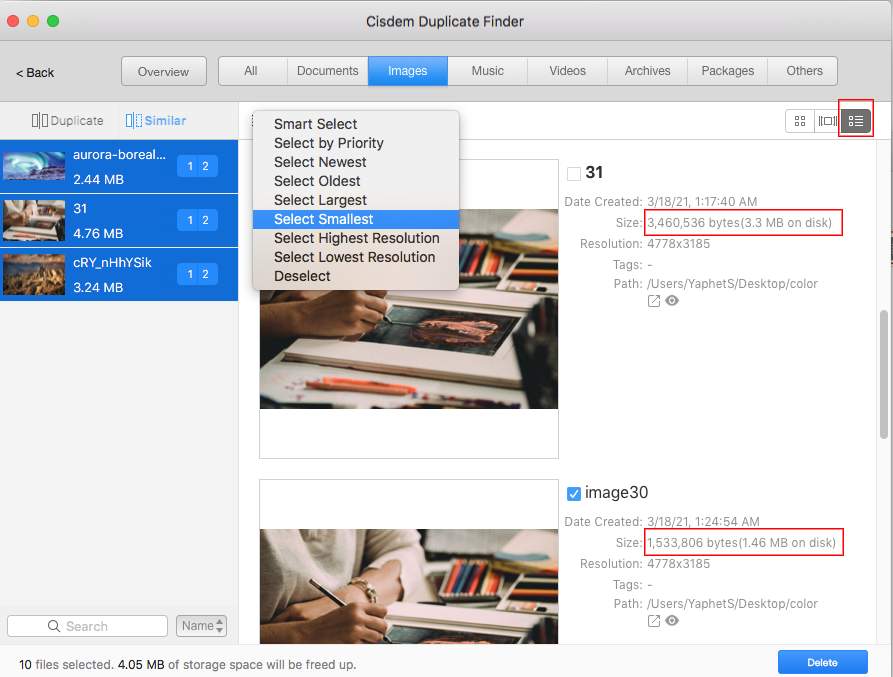 Compared to Duplicate Annihilator, this duplicate file finder and remover is more powerful, configurable and easier to use.

As the name suggests, this app is designed to handle image files only. As a matter of fact, it also supports finding duplicate videos.

Like Duplicate Annihilator, this app only deals with photo duplicates and video duplicates. And what’s better is that it also supports scanning folders on Mac for duplicates. 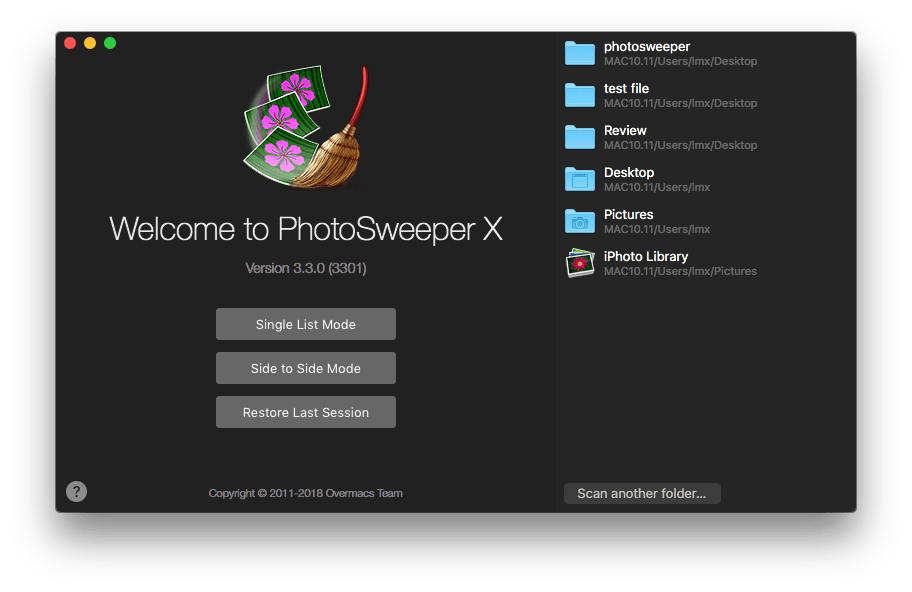 PhotoSweeper also looks for both images that are completely the same and the ones that look very alike. For the latter, there are a number of basic and advanced settings. 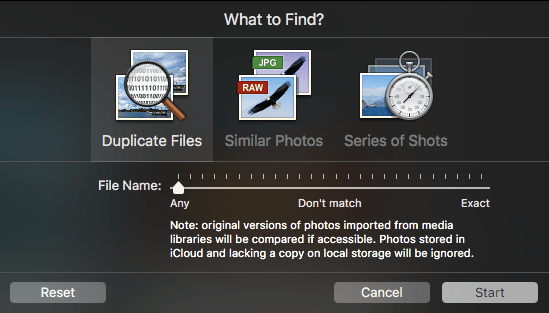 Thanks to the Auto Mark feature, there is no need to mark duplicates for elimination one by one, saving users from some manual work. 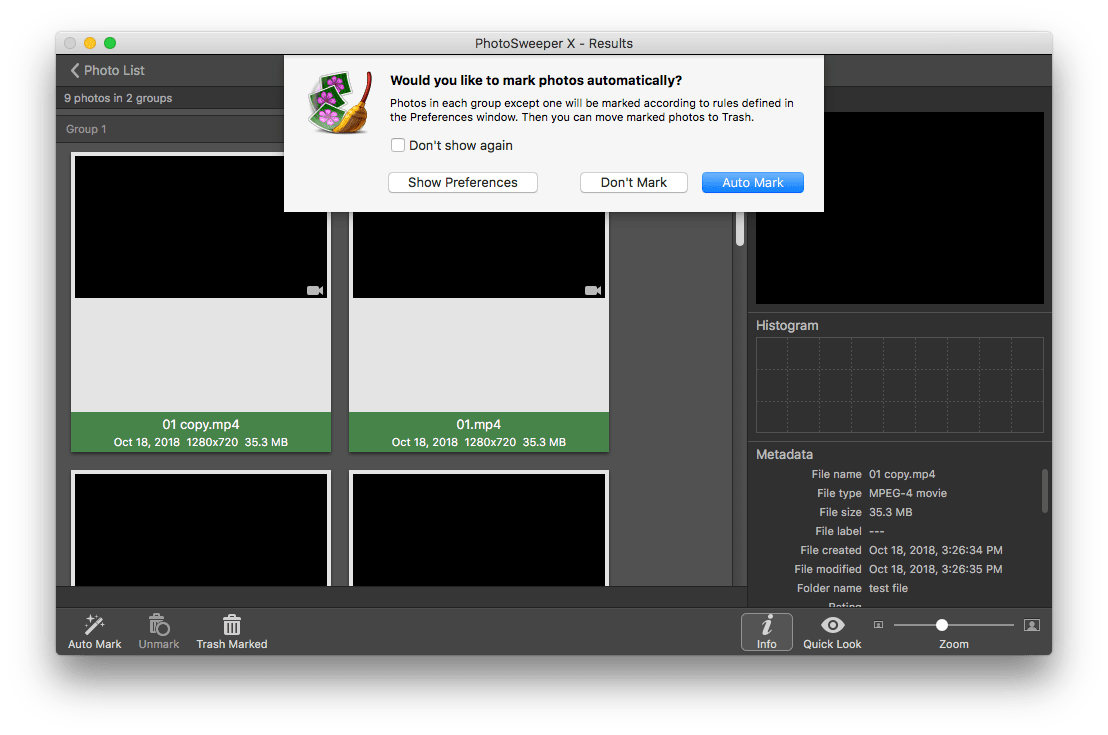 PhotoSweeper is more versatile and flexible than Duplicate Annihilator, but its interface is a bit overwhelming. It requires a learning curve.

This Duplicate Annihilator review, or more precisely Duplicate Annihilator for Photos review, talks about what this app does and whether it is good at its job. This duplicate photo finder for Mac has been around for years with multiple upgrades to fix bugs or improve performance. It does a decent job of finding Apple Photos duplicates, but improvement is still needed. If it can’t meet your needs, you can try the best Duplicate Annihilator alternative recommended above.

How to Lock Photos on Mac with Password in Easy Ways How to Block Websites on Android Phone or Tablet: 6 Ways 8 Best Duplicate File Finders for Mac of 2021: Paid and Free
Home > Duplicate Annihilator Review, Instructions and Best Alternatives